Long Island Housing Services, which worked with local coalitions to pass laws in Nassau and Suffolk counties to outlaw Source of Income Discrimination, has joined a statewide coalition to ban it throughout New York State.

Coalition pushes for new law before the end of the legislative session in June
A statewide coalition of advocates led by Enterprise Community Partners, ERASE Racism, the Fair Housing Justice Center and the New York Housing Conference kicked off Fair Housing Month today by launching #BanIncomeBiasNY, a campaign to amend New York State human rights law to include a lawful Source of Income (SOI) provision that protects individuals using government assistance or other forms of non-wage income to pay their rent from housing discrimination.

More than 576,000 low-income New Yorkers use federal rental assistance to pay for housing. Without Source of Income legislation, landlords can legally refuse to accept their money. Some municipalities, such as New York City, Syracuse and Long Island, have laws banning income discrimination in housing, but they are not uniform and limited in scope. For more information on source of income discrimination, click here. To join the Statewide Source of Income Coalition, please sign up here. [People who believe that they have experienced housing discrimination who live in Nassau or Suffolk Counties, can contact Long Island Housing Services at 631-567-5111 ext 375.  You can find out more about our Fair Housing enforcement program here.]

Assembly Bill 10077, introduced by Assemblyman Walter T. Mosley, intends to amend the State Human Rights Law to include source of income as a protected class, thereby prohibiting housing providers from discriminating against individuals who use non-wage income or funds from federal, state or local governmental entities to pay for all or part of their housing. The Coalition will be holding a press conference and lobby day at the State Capitol on April 24 to encourage the passage of the bill by the end of the legislative session in June. Thus far, more than 40 coalition members from across the state have signed on in support of the legislation, including affordable and fair housing organizations, senior advocacy groups, homelessness advocacy groups and tenants’ rights organizations.

Too often, people in my district and around the state are turned away from apartments due to baseless income discrimination. Even with some local laws banning this, there are many people in this state who face the possibility of homelessness simply because landlords do not approve of where their income originates from. But public assistance should not prevent someone from living in an apartment they can afford. I know that this bill will improve the lives of families in my community and throughout our state.

“Source of income discrimination reinforces segregation, perpetuates generational poverty and limits opportunities for New Yorkers,” said Judi Kende, vice president and New York market leader, Enterprise Community Partners. “This is a civil rights violation; the legislature must act to protect hundreds of thousands of people across the state who use non-wage income to pay for housing.”

The lack of SOI protections impacts some of New York State’s most vulnerable populations, including the elderly, persons living with disabilities, domestic violence survivors, persons who are experiencing homelessness, families with children, ethnic and racial minorities and veterans. SOI discrimination drives poverty and segregation by restricting low-income families to certain areas, often with higher crime and underperforming schools. SOI discrimination is also often used as a proxy for illegal discrimination based on disability, familial status or race. 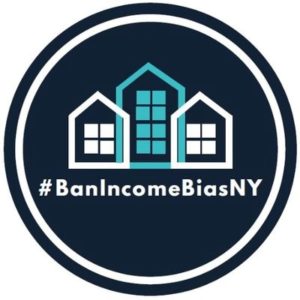 “Source of income discrimination sends an ugly message to many New Yorkers that they are unworthy to be considered for housing or unwelcome to live in certain communities,” said Fred Freiberg, executive director, Fair Housing Justice Center. “Households receiving rental subsidies or income from lawful sources other than employment should have equal access to any housing they can afford.”

“If we don’t put a stop to source of income discrimination, many New Yorkers will be unfairly limited in their housing options. Segregated communities with disparate opportunities is not what I want for future generations,” said Elaine Gross, president, ERASE Racism. “ERASE Racism is proud to stand with the Statewide Source of Income Coalition, fighting for laws that ensure equal access to housing for all New Yorkers.”

About the Statewide Source of Income Coalition

The Statewide Source of Income Coalition, originally organized in 2016 by ERASE Racism, is a vast network of advocates that supports amending the New York State Human Rights Law and expanding the protected classes to include “Lawful Source of Income.” Currently led by Enterprise Community Partners, the Coalition continues to ensure the housing choice of all New Yorkers. Follow the #BanIncomeBiasNY campaign on Twitter at @banincomebiasny. If you are interested in joining the Statewide Source of Income Coalition, please email banincomebiasny@gmail.com. For any additional questions or concerns, please contact Aliya Brown at 212.284.7214.