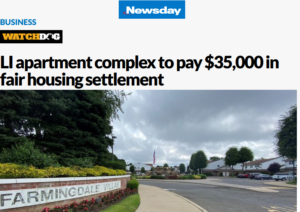 “Long Island’s history racial discrimination and segregation continues into the present. African Americans are still excluded from purchasing home or renting apartments in predominantly White communities on Long Island,” Ian Wilder, Executive Director of Long Island Housing Services, Inc. stated. “Numerous Studies and testing have shown time and again that real estate agents and landlords often steer the African Americans to areas that governmental discrimination have designated as acceptable for the majority of the population to be African American or Hispanic.  Long Island Housing Services has been battling housing racial segregation since 1969 and will continue fighting equal access to the American Dream in 2020.”

“We all have the right to choose our own zip code regardless of a person’s race or color.  It’s the law,” stated Marian D. Reid, Deputy Director of Long Island Housing Services, Inc.

“The color of a person’s skin shouldn’t determine whether they have the opportunity to obtain a place to live,” said Anna María Farías, Assistant Secretary for Fair Housing and Equal Opportunity. “That type of discriminatory treatment is unacceptable, and today’s settlement reaffirms HUD’s commitment to taking appropriate action when housing providers violate the law.”

Additionally, Farmingdale Villas will be required to prominently display the Equal Housing Opportunity logo at the office and all of their real estate related document.  Farmingdale Villas must maintain a non-discrimination policy that requires all staff involved in the apartment rental process to comply with federal, state, and local fair housing laws.

Farmingdale Villas also agrees to include a statement on its real estate documents that Farmingdale Villas does not discriminate based on race, color, religion, national origin, sex, disability, and familial status.  This statement will include contact information for Long Island Housing Services, Inc. or US Department of Housing and Urban Development.

Farmingdale Villas agrees to amend its rental application to include the “equal housing opportunity” logo and the following statements:  “We are committed to equal housing opportunity.  We do not discriminate based on race, color, religion, national origin, sex, disability (physical or mental), familial status, or creed.”  and “If you feel that you may have been discriminated against by a landlord, housing manager/superintendent, any employees, broker or agents of the landlord or real estate broker/agent, you have the right to contact:  Long Island Housing Services, Inc., 640 John Avenue, Suite 8, Bohemia, NY 11716; Telephone Number: (631) 567-5111; Website:  www.lifairhousing.org.”

Founded in 1969, Long Island Housing Services’ mission is the elimination of unlawful discrimination and promotion of decent and affordable housing through advocacy and education LIHS is a private, nonprofit HUD-qualified Fair Housing Enforcement Organization and a federally certified, approved Housing Counseling agency. (www.LIFairHousing.org)